The Smiths. The 15 Best Songs 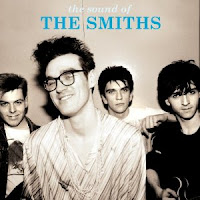 Last week I posted my The 15 Best Songs of Morrissey, so now it's time for the Top 15 by The Smiths. Over the last several days I've been listening to all of the albums, narrowing it down from a long list - not an easy task! There are so many great songs, so I'm sure if I did this again in a month it would be different. These two lists were inspired by the book I'm reading - Mozipedia

. It's an encyclopedia of everything involving Morrissey.

If you'd like to have a listen to the songs on this list, scroll to the bottom for a Spotify playlist.

15.  What Difference Does it Make?

Released as single; appeared on the album The Smiths (1984)
Although it was one of the highest charting songs of The Smiths' career, Morrissey once said that the version released on their debut album was 'absolutely awful.'

From the album Strangeways, Here We Come (1987)
Morrissey's only instrumental performance on any records by The Smiths. During the overdubbing sessions, he sat down at the piano and played some random notes that you can hear in the second half of the song.

Released as single; appeared on the album Strangeways, Here We Come (1987)
Like all of the other songs from their final album,

'Girlfriend in a Coma'

was never played live. By the time the single and album were released, the band was already over.

Released as single; appeared on the album Meat is Murder (1985)
One of only 2 Smiths singles that never cracked the UK Top 40.

Released as b-side to How Soon is Now? single; appeared on the album Meat is Murder (1985)
The only song from the first 3 albums to never have been performed live by The Smiths.

10.  There is a Light that Never Goes Out
Released as single (1992); appeared on the album The Queen is Dead (1986)
One summer evening in 1985, Morrissey stopped by Johnny Marr's house to work on some new material. That single evening produced the following songs: 'Frankly, Mr. Shankly,'

and 'There is a Light that Never Goes Out

Released as b-side to The Boy with the Thorn in His Side single (1985); and on the compilation Louder than Bombs (1987)
Recorded in just 2 hours. It was performed live only once - October 1, 1985 in Scotland.

08.  Please Please Please Let Me Get What I Want
Released as b-side to William, It was Really Nothing single (1984); and on the compilations Hatful of Hollow (1984) and Louder than Bombs (1987).
The shortest track in The Smiths catalog at approximately 1 minute and 50 seconds.  Although it was a B-side, it is one of their most featured songs on film soundtracks, appearing in Pretty in Pink

Released as b-side to What Difference Does it Make? single (1984)
The BBC version features Morrissey and Marr acoustic. It appears on the compilation Hatful of Hollow

From the album Meat is Murder (1985)
Once during the Meat is Murder Tour, Morrissey was hit in the face by a string of sausages. Also, the animal sounds on the beginning of this track were taken from one of Mozz's BBC sound effects records.

05.  Last Night I Dreamt that Somebody Loved Me

Released as single; appeared on the album Strangeways, Here We Come (1987)
The two minute piano intro was originally intended to be a completely different song.

From the album The Queen is Dead (1986)
Mike Joyce's tribal drum intro was created from a sampled loop of his playing. It was added after all of the backing tracks were already put down to tape.

03.  Reel Around the Fountain

. The beautiful piano parts, which are especially prominent in the 'bridge' section, are performed by Paul Carrack, who was a member of Squeeze, Roxy Music and Mike and The Mechanics.

are among Morrissey's earliest, written before his partnership with Johnny Marr began - it was the second song that they completed together back in the summer of 1982. It was performed live at their very first gig at Manchester Ritz on October 4, 1982 and was NEVER performed in concert again by The Smiths.

and The Songs That Saved Your Life

, both written by Simon Goddard.

If you're a vinyl enthusiast, check out my feature on the Spin Clean Vinyl Record Cleaning Machine: