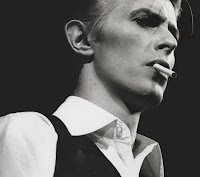 I was planning this list a few weeks back, slowly editing down a very long list of songs. Then last week I saw that Rolling Stone Magazine posted a feature which included Bono of U2 picking his 15 favorite songs by David Bowie. Below are my 15 picks, but I have to tell you... this was so not easy. So many great songs had to be dropped to make room for others. If I did this in a month it would be a different list. Oh yeah, Bono and I had 4 of the 15 songs in common.

I always listen to a lot of Bowie this time of year - when I was a kid, my parents gave me a whole bunch of Bowie albums for Christmas. Hope you enjoy this list - every song is perfect. Scroll to the bottom to listen to these selections on our Spotify playlist.

15.  Fantastic Voyage
From the album Lodger

(1979)
So many songs could've taken this spot on the countdown, but there is just something about this song that is pure and beautiful. It also is one of Bowie's best vocal performances.

14.  Fascination
From the album Young Americans

(1975)
What a departure from 1972's Ziggy Stardust, huh? It's co-written by Luther Vandross, who was one of Bowie's backup singers at the time.

13.  The Bewlay Brothers
From the album Hunky Dory

12.  Letter to Hermione
From the album Space Oddity

11.  Strangers When Me Meet
Released as single; appeared on the album Outside

10.  Heroes
Released as single; appeared on the album 'Heroes'

09.  A New Career in a New Town
From the album Low

(1977)
The drum sound is just killer. This was the last track on Side One of Low. It bridged the gap between the vocal songs to the instrumentals on Side Two.

Released as single; appeared on the album Aladdin Sane

(1973)
The interplay between the cabaret-like style of Mike Garson's piano and Mick Ronson's lead guitar work are exquisite.

From the album Station to Station

(1976)
Another of Bowie's best vocal performances.

Released as single (1973); appeared on the album Hunky Dory

Released as b-side to The Prettiest Star single (1970)
I love this song so much. It was a bonus track on the Ryko edition of Space Oddity. My brother Bart and I used to cover this at several acoustic Audra shows.

From the album Aladdin Sane

(1973)
Brilliant. The guitar solo alone is worth the 99 cents you will pay for this song right now.

Released as single; appeared on the album The Rise and Fall of Ziggy Stardust and the Spiders from Mars

From the album Diamond Dogs

(1974)
Diamond Dogs is my favorite Bowie album. It's mostly known for the huge single, Rebel Rebel, though the album's beauty lies in its lesser-known tracks like We Are The Dead, Big Brother and my #1 pick.

From the album Diamond Dogs

(1974)
I don't even know what to say about it. His voice in the very beginning is wicked and dark.  My favorite moment is when it segues into Candidate and he sings that first line, 'I'll make you a deal, like any other candidate.' It always gives me chills.