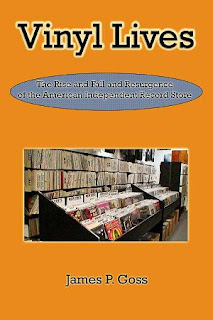 UPDATE: Vinyl Lives On - the third book in the series - has just been published in 2014. Interviews with more stores and record collectors such as Henry Rollins, Bill Frisell, Billy Vera, Joe Travers, Ray Benson and more:

1991 was a fun year to start college at Arizona State University - my brother and I started our band, the alternative music scene was huge and I became addicted to record stores.  On a daily basis I would walk over to Tower, Zia, Eastside and Bird's - all within a few blocks of Mill Avenue in downtown Tempe - not to mention all of the others in the surrounding areas.  Fast forward 15 years and the biggest chain, Tower, is gone, as well as many of the indie shops that I have frequented since starting college.  Then over the last couple of years, I've noticed a few record stores actually pop up in the Phoenix area.  The common thread is that they predominantly carry used vinyl records.

So, it got me thinking... are independently-owned record stores going to be a relic of the past, or are they going to be rescued by the increase in popularity of vinyl?  In my research I found that there are plenty of like-minded individuals out there, including James P. Goss, who wrote a fascinating book on this exact topic - Vinyl Lives: The Rise and Fall and Resurgence of the American Independent Record Store

, Goss tells the individual stories of 25 independent record stores from across the country - some have been open for years, some are brand new and some have already shut their doors.  Through the story of each shop, there are essentially five reasons as to why indie stores have been hit hard:  high rent, the internet, big box stores (Walmart, Target, Best Buy), a bad economy and high list prices set by the major labels.  Surviving hasn't been easy for the ones that remain open.  Each store owner has their own ways of staying above the impending water.

Goss's interviews with the owners and employees are fascinating microcosms into such important social meeting places in our community.  After all, record stores aren't just a place to get your music - they give us a sense of community that we tend to lack in the digital age.  Husbands and wives have met while elbowing their way into the New Arrivals section.  Terry Currier, owner of Portland's Music Millennium, specualtes that 'hundreds and hundreds of people met their spouses, met their best friends in record stores.'  Many great bands began with a chance encounter at a record store.  Peter Buck met Michael Stipe (REM) while working at Wuxtry Records in Athens, GA; Billy Corgan met James Iha (Smashing Pumpkins) while working at a used record shop.  These are just a few of the many.

is that the major labels, at one point, tried to stop record stores from selling used CDs.  What is even more ridiculous is that Garth Brooks made a statement at the time that he didn't want his new album stocked in stores that sold used albums.  The response:  shops like Music Millennium pulled out all of their Garth Brooks albums and sent them back.

This book will act as a bit of a travel guide for me in the near future.  Every time I travel and visit another city, whether on tour or not, the first thing I locate (even before the local vegan-friendly restaurant) is a record store.

Some of the stores featured in Vinyl Lives

, James P. Goss, who was gracious enough to answer my questions.


Over the last few years, the amount of indie stores has dramatically dwindled.  It's depressing to think that something I've loved to do so much since my teenage years - record shopping - is on the verge of extinction.  What was the spark that caused you to write Vinyl Lives?

In the September/October, 2007 issue of Elmore Magazine, there was an article by Andy Valvur about Village Music. Village, with a longtime presence in Mill Valley, California, was closing it's doors. Among the too-numerous-to-mention offerings at the store, an A-list of notable musicians - many of them personal friends of owner John Goddard (i.e. Elvis Costello, Otis Clay, Nick Lowe, Charles Brown--it's a long list!) - would be without a home away from home.

The story threw me into a panic! I started calling several stores and asking them what the hell was going on! While the shops that I contacted assured me that they would remain in business, I could only guess as to the larger picture. After a few more months of grousing and wondering, I decided to write a book about it.

How did you go about selecting which stores to feature and how many of the stores in your book have you visited?

Serendipity played a big factor. Some stores I had read about or visited before. Others stores I heard about from different people and/or store owners.  At first, my selection process revolved around trying to find stores that sold vinyl only. Before long, I realized that stipulation wasn't going to cut it. So, my focus changed to include a wider group.  I should mention that prior to formally starting the book, I had interviewed a few store owners (Russ Solomon of Tower Records in Sacramento, California; Allen Day of Cheapo Records, in Cambridge, Massachusetts and Nunzio Esposito of Backbone Music in Delray Beach, Florida) for a resurgence in vinyl related feature in Elmore (Vinyl Revival: Platters Still Matter, March 2008).

Once the article was done, these were my main go-to guys for the book. Allen Day told me about Enterprise Records, a Portland, Maine record store, which turned out to be my only vinyl only store in my group of stores for the book. Oddly, it wasn't until I had finished the manuscript (my goal was to write about 25 stores) that I found out about Jerry's, in Pittsburgh, Pennsylvania--one of the best all vinyl stores around! I've since heard of one or two more. 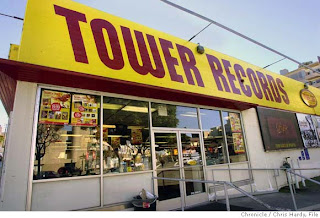 Among the stores included in my book, I've visited several. For instance, Tower Records. Their second store (located in San Francisco, circa 1968) was a store that I visited constantly. I also lived in the Boston area for several years. Cheapo was--and still is!--one of my favorites. Backbone Music and Radio-Active Records are both South Florida stores (Backbone is now closed, however) within a short drive of my current home. In 2005, I visited Amoeba in San Francisco.

What changes do you think we'll see in indie record stores in the next 10 years?  Do you think more will close or do you believe that vinyl will save them, and actually increase the amount of indie stores?

That's a tough question. Currently, total domestic vinyl sales are still a small fraction of yearly totals. As for survival rates, the answers for that depend a lot on where a particular record store is located. Affordable rents are key to survival, as are supportive communities.  Vinyl probably won't--by itself--"save" anyone. However, just about everybody appreciates it and the fact that it is still around! Also, profit margins on used vinyl remain attractive for many brick-and-mortar stores and can indeed be a significant source of income.

My guess is that 10, 20 years down the line, we'll still have a core group of independent record stores. Large cities may fare better than smaller markets and, depending on whether upcoming generations embrace physical stores, the indie store as-we-know-it will evolve into more of a specialty, museum-type of experience.

It was mentioned in your book that new vinyl sales have gone up enough to cause a big box store like Best Buy to carry a few titles on vinyl.  Do you see that trend continuing with other big box stores?  And could that be a final blow to the indie store?

A lot of indies are insulated from that threat because of their depth and breadth of catalog. These stores carry tons of stuff that no Big Box would dream of carrying.  In my view, the "final blow to the indies" scenario isn't really that likely.  However, if a big box retailer chooses to offer new vinyl as a chain-wide loss leader (a form of cheap lure to get people into their stores), that could put a crimp in that particular part of the market.  But for the time being, it seems like vinyl remains a niche item.

On a lighter note, what was / is your favorite record store?

I'll always appreciate Tower for what it was.

What was your first record? 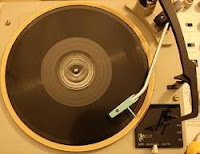 I collect vinyl myself and when I'm at home, it's pretty much the only format that I listen to.  I get asked this question a lot by people who seemed confused as to why I buy vinyl records.  Let me ask you, what is it about the vinyl format that you love?

To me, a record (78, 45, LP, etc.) is a document. It exists as a tangible, physical piece of evidence, like roots on a tree. Before a note even gets played, a record provides a brief education. Artwork, pictures, studio information--these details can illuminate musical history! I'm a huge fan of liner notes. On a lot of records, the people writing the liner notes knew the music--and the musicians. They cared about the craft of what it takes to be appealing to the ears.  Provided vinyl records are produced and engineered with an adequate level of craftsmanship--and remain in good condition--they contain an abundance of musical information.

By comparison, music reproduced digitally, particularly via MP3, has had much of that recorded information removed - there just isn't enough space provided for it. MP3 algorithms were devised to remove parts of the audio spectrum deemed to be inaudible and/or unnecessary.  By contrast, vinyl often retains its "Full Spectrum" sound, delivered with warmth and presence. Analog isn't perfect, but to me it comes closest to reflecting sounds heard in the real world.

Very well said.  When you walk into a record store, what's the first thing you go looking for?

I like to read about music. So, often, I'll read something and jot down a note about a song or record that looks interesting. A few times a year, I go record hunting.

What's the most you've spent on a record?

Did you ever switch over to CDs or have you always stuck by vinyl?  Do you own an iPod?

For years, I refused to buy CDs. In 2005, I had to trade-in my old car (with a cassette deck) for a newer one, with a CD player. I loathe radio, so I had to start buying CDs. iPods? No, they're still the enemy!

These are all tens!

is available at any of these indie record stores or at Amazon.com