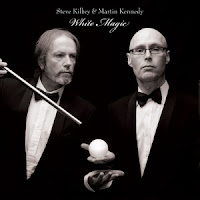 "Life is like a river, baby - you've got to find a way to get across before everything's lost"

Many of you may know Steve Kilbey as the singer of the great Australian band The Church. With over 20 Church records, eight solo albums and numerous collaborations, it goes without saying that Steve Kilbey is incredibly prolific. 2011 brings the second album from his pairing with fellow Australian, and leader of All India Radio, Martin Kennedy. Since it appeared in my mailbox a couple of weeks ago, it has quickly become one of my favorite albums of the year.

opens with The Demo,

a spacey track with a cool backbeat and female backing vocals ala Dark Side of The Moon. A killer opener.  Intense

is stunning. It contains my absolute favorite moment of the album: the guitar solo - just perfect in its simplicity. Intense

is the best of the best on this album, and it's been on constant repeat. Check it out below.

is a solid record all the way through. Martin Kennedy's instrumentation lays a relaxed, dreamy backdrop to prop up the rich texture of Kilbey's vocals. In fact, his vocals have never sounded better to these ears. I'm gonna stop talking now, because we can't waste any time here - you gotta add this album to your collection right away, it is a gem.