Glen Campbell Releases His Farewell Album - Ghost On The Canvas: A Review 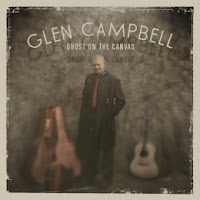 Glen Campbell. The country music legend. The variety show host. The phenomenal guitar player, studio musician, touring member of The Beach Boys. The face in that horrible mugshot. The family man whose live band includes five of his children. The journey and the end of the road.

By The Time I Get To Phoenix

- I remember all three of you on the jukebox at Arthur's Grill on Mannheim Road in Stone Park, Illinois, where my brothers and I would go with our parents after Little League games. Those songs and memories are an irreplaceable part of my past. Years later, I rediscovered Campbell with the release of 2008's Meet Glen Campbell

, which featured amazing covers of U2, The Replacements, Tom Petty, Green Day, Foo Fighters, The Velvet Underground, John Lennon, etc. Like Johnny Cash's Rick Rubin-produced albums, Campbell breathes new life into those songs, with a voice backed by an entire lifetime of knowledge.

A few months back, Campbell announced that he was suffering from Alzheimer's disease and would be concluding his career with a final album and tour. Ghost On The Canvas

- contributes two songs: the outstanding title track and Any Trouble

This is an atypical review for me, because I'm not going to get into the individual songs, however I will tell you this: I've listened to this record countless times already, and when the final notes of There's No Me...Without You

fade away, I find myself immediately starting it over and over again.

The songs reflect on his life and its approaching conclusion. It's filled with words of wisdom from someone who has achieved serenity from a lifetime of highs and lows. It's an album that makes you think of that first beer you drank with your father on a Sunday afternoon, or playing pool in a basement with wood paneling and a couple of beer signs on the walls. It makes me sad that this is Glen Campbell's farewell. Without a doubt - FIVE STARS.

'One thing I know, the world's been good to me. A better place awaits you'll see.' - A Better Place

Buy Ghost On The Canvas on Amazon: CD