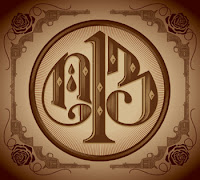 The importance of neighborhood record stores is demonstrated right here. My brother and I visit one of my favorite shops in the Phoenix-area - Hoodlums Records. While flipping through the vinyl racks, a song comes on that I just can't pinpoint the era, or the singer. It's country, but it's legit, old-school country. My brother beats me to it and asks the guy behind the counter who it is. Nick 13. Yeah, the guy from Tiger Army. I drop the 10 quid and buy it on the spot. Within the first 24 hours I'm probably up to fifteen listens. This rarely ever happens.

As mentioned earlier, Nick 13 is the leader of Northern California's punk / rockabilly / psychobilly group, Tiger Army. I've seen his band perform a couple of times over the last ten years, but didn't connect with it as strongly as I do this solo record. Nick's voice here is smooth. Gram Parsons smooth. Chris Isaak smooth. Roy Orbison smooth. Just the right amount of vibrato quiver to make this authentic. I hear subtle nods towards Kill Uncle-era Morrissey and some good ol' Hank Williams coming through.

has that great, feel-good, country-traveling, gotta-get-away groove, that would've been perfect during the cross-country trips my family would take when I was a kid, piled into a station wagon listening to Eddie Rabbit on the radio, while we drove our life away. :) 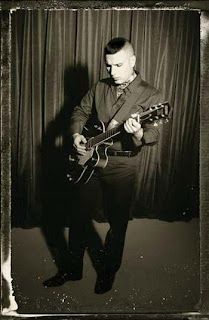 is tops. It's got the vintage call-and-response backing vocals like the old Patsy Cline jukebox classics. It's part Ghost Riders In Sky, part Santo and Johnny's Sleep Walk. Restless Moon

are instantly catchy, must-listens, with some excellent guitar playing.

Among the ten tracks are two Tiger Army re-workings, originally appearing on 2001's Power Of Moonlite

is drastically different, slowing down its frantic pace and taking away its 'rock' elements, while In The Orchard

benefits from a more laid-back, lush arrangement that outshines the original.

The album was produced by Greg Leisz, who has worked with everyone from Emmylou Harris to the Smashing Pumpkins, along with actor/musician James Intveld. The band is top-notch and even includes a guest appearance by Lloyd Green, who played pedal steel on The Byrd's phenomenal Sweetheart Of The Rodeo

However you call this album - Americana, Country or Hillbilly - it is truly one of my favorite albums of 2011.