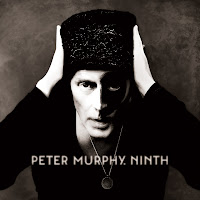 Whenever I hear a new album from an artist that I like, one of the first things that I listen for is a song that will stand the test of time - a song that will continue to be performed live after the token 'new album tour.' So, does such a song exist on Ninth

, was doomed from the start when the label went belly-up as the record was released. While it may seem like he's been inactive - after all, seven years is a long time between albums - in the meantime, he reunited with his former bandmates to have another go at Bauhaus with a tour and a new album - Go Away White

; he has also toured several times - once with Nine Inch Nails; released a series of cover songs, and even collaborated on a second Dalis Car

album with the late Mick Karn. So the man hasn't been slacking.

is Peter Murphy's edgiest solo album to date. At 53 years old, there is no sign of him mellowing out on this new record. He's got a seasoned, road-tested band behind him and a batch of some really good material. 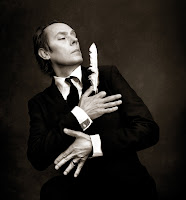 Some songs are immediately catchy and accessible - the lead-off single, I Spit Roses

and its digital b-side The Prince & Old Lady Shade

. The latter is just an incredible piece of music with beautiful strings and a melody that stays with you.

Other tracks really sneak up on you the third time around. One of those being my absolute favorite, Uneven & Brittle. With its crunchy guitars and a mega-intense chorus - this is gonna be a powerhouse in the live setting:


You spit as you say,
'I get crushed by my dreams that i crawled and begged for.
It's myself I deceive, I got all I ask for.
If I wait in deep sleep, there's nothing there to pray for.
Uneven and brittle, is there fruit on our tree?'

At the song's climax, Murphy lets out a 15-second scream that will send shivers down your spine.

, the album's second single, is another striking moment with its duel guitar melodies bobbing and weaving around the vocals. Like most of the songs on Ninth

, it is dynamic and emotional. The album has its gentler moments with the acoustic-based Never Fall Out and the album closer, Creme de la Creme. Creme begins as a piano ballad, and then continues to build. It made me think of Ziggy Stardust's conclusion, Rock 'N' Roll Suicide

, mixed with his own My Last Two Weeks

So, to revisit the criteria that I set in my opening words... The Prince & Old Lady Shade, I Spit Roses

and Uneven & Brittle are my picks for the tracks that will remain part of his live set for years to come.  :)

Peter Murphy is moving forward. Like all good artists, it's all about what you create in the present and future, that makes you still relevant. I applaud him for this new album. Cuts You Up

is over 20 years old now, it's time to make some new memories. Buy Ninth