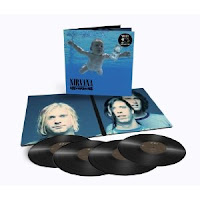 Today marks the official release of the 20th Anniversary Edition of Nirvana's breakthrough second album, Nevermind. I will never forget watching Headbanger's Ball at 1:55am, one Saturday night, when a brand new video was premiering at the very end of the show. From the moment that 4-chord riff began, I stared at the TV for the entire 5 minutes - transfixed. When the song ended, I went into my room where my brother was playing guitar, and said, "I just heard a song that was so great and this band is going to be huge." He asked me what it was called. I replied, "Smells Like Teen Spirit."

There is no denying the impact Nirvana had on changing the musical landscape in 1991 - and for that matter, over the last 20 years. The Nevermind album produced four huge singles and sold millions of copies.

As I mentioned earlier, Nevermind is being reissued today in a few different formats, along with tons of bonus tracks, demos, rarities and the original mix of the album by producer Butch Vig. In this digital age, if you're not wanting hard copies, you can buy the full digital versions or select tracks. Here are the links to check out the various editions.

As always, it's difficult to compile and rank a best of list, so feel free to leave your thoughts and lists in the comments section below. Please scroll down to the bottom for a Spotify playlist that compiles the featured songs.

"It amazes me, the will of instinct"

"If you wouldn't care, I would like to leave"

"Sunday morning is every day for all I care"

"I wanna be alone"

"Give me a Leonard Cohen afterworld, so I can sigh eternally"

"The choice is yours, don't be late"

From the compilation Incesticide (1992)

"Love you so much it makes me sick"

"I'll take advantage while you hang me out to dry"

Released as single; appeared on the album In Utero (1993)

"What else should I be, all apologies"

Released as single; appeared on the album In Utero (1993)

"Throw down your umbilical noose so I can climb right back"

Released as single; appeared on the album Nevermind (1991)