I've seen hundreds of bands perform live.  This was as good as it can possibly get.  Phoenix was absent on their tour itinerary, so there wasn't even a second thought to make the 6-hour drive to the Disneyland House Of Blues in Anaheim.  Two years ago, they toured for their last album, Hey Ma

- a great album and a great tour.  This time around it was to promote their double-album, The Morning After The Night Before

'Tell Her I Said So', dedicated to singer Tim Booth's mom, was just amazing.  There was a great feeling of spontaneity as the band seemed to mix their set list up and play some real rarities - 'What's The World', which was the first song they wrote and one of the few cover songs that The Smiths performed live, 'Jam J' from the experimental Wah Wah

album and a track from 1982 called 'Stutter.'  Tim jumped down into the crowd during 'Come Home' and sang from atop the bar.  Several tracks from Laid

were prominent, including the brilliant 'Out To Get You' and 'Sometimes', which always ends in an a capella sing-along, 'Sometimes when I look in your eyes I can see your soul.'  One of the best parts of a James show is trumpet player Andy Diagram.  When not playing trumpet, he is often hitting a tambourine and singing along without a microphone.  During 'Sound', he walked off the stage and the next minute was up in the VIP balcony with us playing his trumpet. 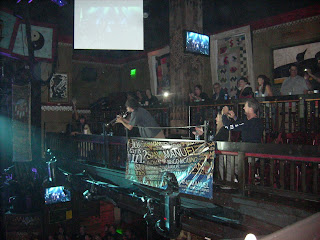 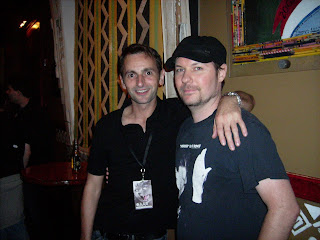 Jim Glennie of James and me

Set List:
PS
Five-O
Tell Her I Said So
Dust Motes
Got The Shakes
Seven
She's A Star
Come Home
What's The World
Stutter
Out To Get You
Johnny Yen
It's Hot
Sit Down
Laid
Sound