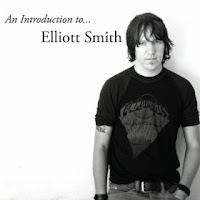 For music fans who just plain missed Elliott Smith during his brief career, or were just a little too young at the time - now is your chance to see what all of the fuss was about.  Kill Rock Stars, the record label home to all but two of Smith's albums, has just released a 14-song collection called An Introduction To Elliott Smith

Like creating a mix tape/CD for a friend, it is never easy - you only have room for so many songs, and you want it to be a good representation of the artist's complete body of work.  The majority of the tracks are taken from two of his indie releases:  Elliott Smith

(1997), including the sly double entendres of 'Needle In The Hay'

and the tragic 'Alameda'

(nobody broke your heart / you broke your own).  Only two tracks appear from his major label offerings: the outstanding Waltz #2 from XO

(2000).
While Elliott didn't have any mainstream hit singles, he did have his moment in the spotlight when Miss Misery (from the Good Will Hunting Soundtrack) was nominated for a Grammy in 1998.  An early version of Miss Misery, taken from the double album of rarities - New Moon

- is here in its stunning, bare form with just acoustic guitar and voice.

This collection would not be complete if it weren't for two of my favorites: 'Twilight'

and 'Pretty (Ugly Before)

' off Smith's final album, From A Basement On The Hill

.  I was a little disappointed to not see St. Ides Heaven

included, but that's okay - there are plenty of gems left for you to discover from each of his albums.  I say fall in love with this one, then go back and get them all, beginning with From A Basement On The Hill

.
Elliott Smith was an amazing singer, guitarist and songwriter.  Unfortunately we will never see the full extent of his talent, as his life came to a tragic end in 2003 at the age of 34.

, Needle In The Hay