Color Me Obsessed. 5 Questions with Gorman Bechard - Director of The Replacements Documentary 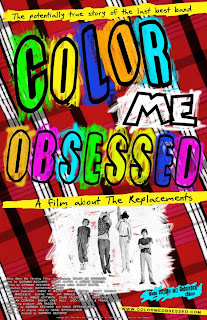 "It's fun to be one of the people who knows."

Back in October, I had the privilege of watching what I would consider one of the best music documentaries I've ever seen. Featuring over 140 interviews with friends, members of the music press and fans - obsessed fans - this is the story of one of the greatest bands, told in chronological order by the people who were there, and those that were touched by music of The Replacements.


Currently playing in various cities across the globe, Color Me Obsessed is a must-see for any fans of The Replacements, or for that matter, anyone who likes music - period. Random fans, journalists, members of bands like Husker Du, Babes in Toyland, Ramones, The Decemberists, etc. pour their hearts out - it's quite a touching testament to the power of music.

Director Gorman Bechard was kind enough to sit down for a short interview with me for Life On This Planet. Visit the Color Me Obsessed site to see when it's playing in your town. Please enjoy.

1.  Unlike other music documentaries, there are no band members ever shown, nor is there any of The Replacements' music included. I personally think the film greatly benefits by this.  Was this your intention from the start?

Yes, absolutely. I'm not a fan of music docs made after a band has broken up. They play like VH1 "Where Are They Now" specials to me. I honestly don't know of an exception. So, when this film fell into my lap, I quite literally was lying in bed one night thinking about what I could do to make it different, to make it the doc the band deserved. I realized that I didn't believe in god, but I believed in The Replacements. Other people believe in god without every seeing or hearing him. Could I make people believe in The Mats without ever seeing or hearing them. The more I thought about it, the more I became obsessed with the idea. This was a band that bucked tradition at every turn. They deserved a doc that did the same thing. And I knew I would either fall on my face, or succeed...in the Mats tradition.

2.  There are well over 100 people interviewed in the film, which I imagine was insane to coordinate.  How did you go about selecting/finding everyone... and why not include manager Peter Jesperson, or Peter Buck?

A number of great co-producers in different parts of the country arranged the interviews. We'd all brain storm names, and put together that master wish list and go after them. We'd put out a call on Facebook, contact agents, anyone we knew. Jan Radder especially, in Minneapolis, brought in around 50 interviewees, including some of the amazing fans. Plus, once people realized what we were doing, one interview lead to another, and so on.


We tried for Peter Buck. Couldn't get him. And Jesperson really was the fifth member of the band, he was almost too close. But he did help with facts and figures.


3.  After watching the film - which by the way, compliments on creating something that forced me out to a public theatre for the first time this year - I immediately ran home and listened to every single 'Mats album.  Why did you make this film, and what does this band mean to you?

I had always wanted to make a documentary, but I knew it would have to be on a subject I was insanely passionate about. The Replacements are certainly one of the great passions of my life. And I felt their story needed to be told. It's the ultimate rock n roll story. I mean, rock n roll is not about hitting your light cue on stage. That's musical theatre. And rock n roll is in such a sad state right now. Bands like Vampire Weekend and their ilk have cuts the balls off rock music with a dull butter knife. People need to know what rock was, and what it could be. And fans of bands like Nirvana, Green Day, and virtually every rock band of the last 20 year NEED to know their bands don't exist without the Mats. They were, quite simply, the band that redefined rock and ultimately that saved rock (at a time when even the punks from England had turned to synths). Are they the greatest rock band of all time? Yes. No one is even close.

4.  The film is currently making its rounds at various film festivals across the globe, when can we look for a DVD release?


Most likely in the first quarter of 2012. Expect a single DVD with some extras, then eventually a double DVD set with a boat-load of extras, including the entire Grant Hart interview.


In no order: Here Comes A Regular, Color Me Impressed, Can't Hardly Wait, If Only You Were Lonely, Favorite Thing. Though I reserve the right to change my mind at the drop of an empty beer bottle.

Be sure to check out the Color Me Obsessed Official Site for show dates, merchandise and lots of other rad features


The Replacements Discography on Amazon

Email ThisBlogThis!Share to TwitterShare to FacebookShare to Pinterest
Labels: 5 Questions, The Replacements