Brian Eno - Small Craft On A Milk Sea: A Review 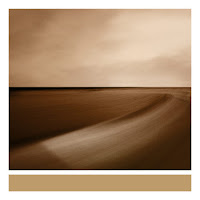 I was quite enthused when I found the new Brian Eno album staring back at me from the bottom of my mailbox, courtesy of Warp Records. Recently I've discovered that a lot of people don't really know who Brian Eno is, other than he's a song on the new MGMT record

. So before we get into Small Craft On A Milk Sea

, let's do a little history.

Eno started his professional career as a member of the great Roxy Music. After two albums, Eno began a solo career which quickly evolved from a rock-based format, into delicate ambient instrumentals. Eno then took on the role of producer, and has worked with some of  the greatest artists in music history - U2, David Bowie and James - just to name a few.

I haven't really followed much of his solo output in recent years, so after coming across a press release, I was curious to see what Eno was up to. Joining him on Milk Sea are pianist Jon Hopkins, who worked alongside Eno on the latest Coldplay album, and guitarist Leo Abrahams, whose credits include Jarvis Cocker, Nick Cave and Marianne Faithful.

The album opens with a stunning composition of piano and synths called Emerald And Lime. I really had a hard time moving on to the next piece, because I just keep on listening to this one over and over again. [Check out the audio clips below] The majority of the album focuses its attention on sparse soundtrack pieces, for which Eno has vastly explored in the past with his Ambient series and many other albums. The production on Milk Sea is so crystal clear that at times you get sucked into a false serenity, although common sense tells you that there is something dark lurking all around. It's a cool juxtaposition. A surprise tribal assault begins with Flint March and lasts for the next five tracks. This is the most rockin' I've heard Eno since his second album, Taking Tiger Mountain By Strategy

- it caught me off-guard. Respite arrives when the last seven compositions bring it back to where it all began - cold, icy and desolate.

Overall this will make a nice addition to your collection. The CD version has some beautiful artwork and their is a limited vinyl run as well.