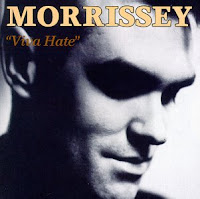 Right now I am reading this killer book called Mozipedia

- review is here.  It's an encyclopedia of everything involving Morrissey - The Smiths, solo career, etc.  While I am reading, I've been listening to everything Morrissey and it got me to thinking.... what are the absolute best solo Morrissey songs?  Here are my 15 selections.  Please feel free to leave your list in the comments section at the bottom of the page.  Click on song titles to purchase - or scroll down to the bottom for a Spotify playlist.

- The B-side to Everyday Is Like Sunday. Such a beautiful arrangement of acoustic guitar and strings.  The woman shouting 'Steven' in the background is producer Stephen Street's wife who was visiting the studio the day it was recorded.

Memorable quote:  I will live my life as I will undoubtedly die - alone.

Memorable quote:  There is no one on earth I'm afraid of.

- My favorite track from 2006's Ringleader Of The Tormentors

.  In an interview with The Sun upon its release, Morrissey had this to say, "I think life for many people is a pigsty... and I don't think the world is a particularly fantastic place.  But once again, we're not supposed to say these things, are we?  It's supposed to be rock 'n roll, and wild, and beer, and madness.  I'm just being realistic."

Memorable quote:  Life is a pigsty and if you don't know this, then what do you know?

- Also from You Are The Quarry

, this great track fits in with the other Morrissey crime songs, such as The Last Of The Famous International Playboys.  Although it wasn't released until 2004, it was played live on his August 2002 tour - as witnessed by yours truly on his stop in Phoenix at The Celebrity Theatre.  It was so memorable that when I bought the album 2 years later, I recognized it immediately.

Memorable quote:  And he stole from the rich and the poor and the not-very-rich and the very poor.

11.  Why Don't You Find Out For Yourself

- From my favorite Morrissey album, 1993's Vauxhall And I

Memorable quote:  I've been stabbed in the back so many many times, I don't have skin but that's just the way it goes.

- Morrissey's 18th solo single is a tale about a defeated fighter.  Originally released as a non-album single in 1995, it was later included on the compilations World Of Morrissey

and My Early Burglary Years

Memorable quote:  Your weary wife is walking away.  Your nephew is true, he still thinks the world of you and I have to dry my eyes.

- This song, also from Viva Hate

, is probably on everyone's top list.  Not much more can be said about it.  It's one of his most popular solo songs.

-  The glorious, opening track from Vauxhall And I

Memorable quote:  Everyone I love in the house will recline on an analyst's couch quite soon.

- Originally planned to be a part of his second solo album, Interesting Drug ended up being a single that was then a part of his first compilation Bona Drag

, which collected his early singles and b-sides.  Making up part of his backing band on this track are former Smiths, Mike Joyce and Andy Rourke.  Backing vocals provided by Kirsty MacColl.

Memorable quote:  Because enough is too much.

- Originally released as the b-side to 1992's Certain People I Know, and produced by Mick Ronson (from David Bowie's Spiders For Mars), the definitive version is the live take that appears on Beethoven Was Deaf

and World Of Morrissey

Memorable quote:  No one knows a thing about my life.  I can come and go as I please.

- I've probably listened to this song hundreds of times.  From Moz's second solo album, Mute Witness is about a woman who witnesses a crime but is not able to give the police details on what she saw.  Cool haunting, backing vocals at the end of this standout track from Kill Uncle

Memorable quote:  Now see her mime in time so nicely.  It would all have been so clear if only she had never volunteered.

- Morrissey's debut single after leaving The Smiths.  Vini Reilly, Durutti Column guitarist, was brought in to play guitar on the Viva Hate

album, but refused to play the guitar break in the bridge section because he felt it was 'too easy.'

Memorable quote:  Why do you come here when you know it makes things hard for me?

03.  The Last Of The Famous International Playboys

- Most likely one of everyone's favorite Morrissey songs.  Former Smiths, Andy Rourke and Mike Joyce, make an appearance on this track addressed to the gangster Kray brothers.  According to author Simon Goddard, one of the Krays gave his 'approval' of the song, stating he 'liked the tune,' but felt the lyrics were 'lacking a little.'

Memorable quote:  I never wanted to kill, I'm not naturally evil.  Such things I do just to make myself more attractive to you.  Have I failed?

.  The thunderous drums at the very end were recorded in the dining room at the studio were the album was recorded.

Memorable quote:  I've always been true to you, in my own sick way I'll always stay true to you.

.  Although it was released back in 1988, it was never played live until 2002.  Almost reaching 8 minutes in length, this track is a masterpiece.